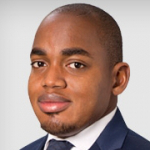 Jerry’s client relationships are tailor made

Jerry Folly-Kossi is a sharp-dressed man. And that isn’t by accident. When he isn’t busy as a financial analyst in the Business Valuation and Litigation Group at Hemming Morse, he’s running his own custom menswear company, Swell Attitude.

We talk about how his fashion was influenced by growing up in Paris with his family originally from the Ivory Coast. And when he isn’t designing custom men’s clothes, he’s practicing martial arts or playing soccer in a very competitive league with former professional players.

Jerry graduated from UCLA with BA’s in both Economics and Political Science. He later went on to receive his MBA from the Graziadio School of Business & Management at Pepperdine University. Before joining Hemming Morse, Jerry worked for numerous Fortune 500 companies in the field of Investment Banking, Consulting and Accounting, namely Ernst & Young, Merrill Lynch and Burr Pilger & Mayer.

Other pictures of Jerry

Adrian is an Accounting Dept Chair & Children’s Book AuthorAdrian Mayse talks about what inspired him to...